The transit and the sextant 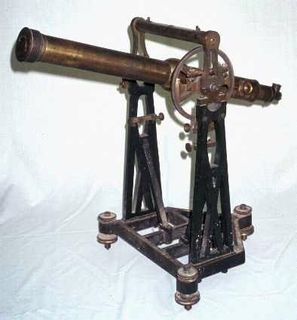 Many different astronomical instruments have been used throughout the ages. Two stand out as having played particularly important historical roles: the transit and the sextant. Such diverse fields as stellar cartography (mapping), navigation and the determination of time have all progressed significantly thanks to these instruments.

The transit is used to measure the precise moment that a celestial object passes through its highest point in the sky (also know as the meridian). Used since ancient Egyptian time, the modern form of this instrument consists of a telescope that only moves vertically. A dial on one side, graduated from 0 to 90 degrees, is used to measure the inclination of the telescope.

When the celestial object in question passes through the meridian, the observer notes its angle above the horizon at the precise moment of its passing. These two measurements provide the coordinates (the position) of the object in the celestial sphere. A map of the sky can be thus be assembled bit by bit and used to create tables that give the positions of stars, planets, the Moon and so on for the purposes of navigation or determining the exact time.

The sextant is an instrument that can be used to determine the angle between a celestial object and the horizon. Used in conjunction with the transit tables, it is a simple matter to calculate the latitude of one’s position.

The predecessors of the sextant included the astrolab and the octant, both of which operated on the same principle. The modern version of the sextant was independently invented in the 1730’s by John Hadley in England and Thomas Godfrey in the United States.